i swear we do more than just loiter in restaurants. i mean, i guess? no, we do.

well, i went to california two weeks ago, and so much happened while i was there and since i’ve been back in salt lake. once we get settled into what’s been happening, i’ll post about it! but for now, nom nom.

when i got back from california, all i wanted to do was go to brunch. the entire week i was at my folks’ house it was in the triple digits {like, above 110 degrees} so i got back hot,  tired and ready for the weekend. waking up late on a saturday and taking those first few sips of diet coke after you’ve been seated at a restaurant is one of life’s greatest small pleasures. well, that and realizing you did in fact remember the tapatio in your purse.

upon my return, we decided to try hub and spoke diner. located at 1291 S and 1100 E, it’s nestled right at the bottom of a darling neighborhood where our friends micah and kait live. micah has been matt’s mentor of sorts with programming and they are also bff’s from arizona. anyway, we decided to eat on the patio and i am so glad we did {you know how i love a good patio!}

i got the biscuits and gravy, which is something i’ve been way off into lately. matt made it for me once when we were dating and i cannot get enough of it now. probably why i gained 10 { 15 } pounds since we met. but that’s neither here nor there.

the gravy was amazing and the cheddar biscuits were super soft and flaky, baked to perfection! the rosemary potatoes were subtle but flavorful, which was welcomed with such a heavy main dish.

matt got a kentucky hot brown, which is smoked turkey, béchamel, bacon, avocado, tomato, swiss cheese, sourdough, and an egg, sunny side up. it was quite a vision! it came in this super cool skillet-he of course always gets the interesting stuff. he loved it {high praise coming from my food-snob hubby}.

i love to take pictures of matt taking pictures of his food. it’s so silly, but i love it! 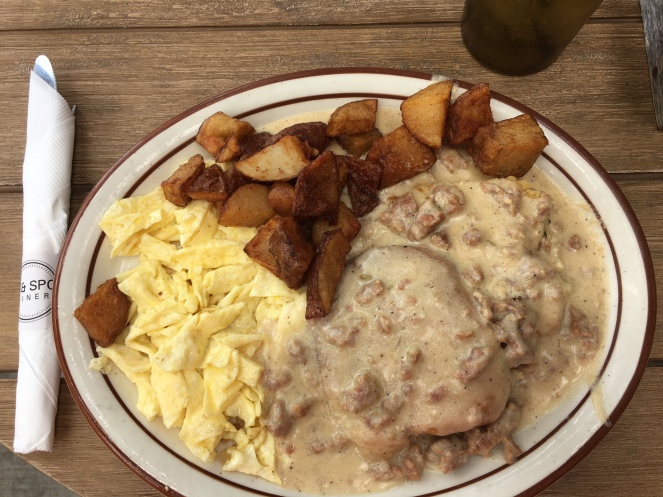 hub and spoke is part of the pago-finca-east liberty tap house-trestle tavern family. we’ve only been to pago {review is hyperlinked} but we’ll make it to the others, for sure! at the rate we’re eating out, probably by next week.